As I dance in air-conditioned stadiums at my ninth World Cup, my mind drifts back to my first. One night at university in 1990 a friend told me he could get unlimited tickets to the World Cup in Italy. He knew someone whose father worked for Mars, a sponsor. Mars had tickets, but its Asian and American customers didn’t want to go to any football event with hooligans. Days later we took the ferry at Dover. At the next World Cup in 1994 in the US, I was a footman for an American television station tasked with identifying players who had been hit or injured or done something so the producers could put their names on the screen. I misidentified most of the time.

But I haven’t missed a tournament since, and now when I ride the Doha subway – “Sir, you can get on the train,” Filipino members of the “Events Team” helpfully explain as the doors open – I find myself with how I compare all my tournaments. My preliminary conclusion: Qatar embodies a deteriorating World Cup trend, namely that there is no “there”. The tournament has become a TV set or an Instagram backdrop. Football fans don’t have to envy us for being here. The actual World Cup takes place at home.

The French anthropologist Marc Augé coined the term “non-places”: generally “supermodern” places of transience, such as airports or hotel rooms, where people hardly leave any traces. It’s a modern World Cup, especially this one. The stadiums are new, with no traditional history. Built away from neighborhoods, with large guarded fences, they have no relation to place.

It’s Doha, but it could be Brasília. The seats are filled with sponsor guests, journalists whining over the wifi, Fifa bodies just trying to weather the embarrassment of this World Cup and bipartisan wealthy soccer tourists watching two games a day.

Everyone hunts that rare beast: the truly dedicated fan. What caused fear in 1990 is now the World Cup’s biggest selling point. A few fly in every day: typically the upper middle class in rich countries, the English skilled working class and the upper class in poorer countries. For example, Ecuador’s fans are much whiter than the Ecuador team. The moment someone acts like a fan in a Coca-Cola ad — say, bangs a drum — everyone crowds around them, filming them and sending the “passion” viral. Mostly viewers film themselves: in 2018, I saw an endless line of Peruvians descending an escalator on the Moscow subway, each with a smartphone in front of their face. 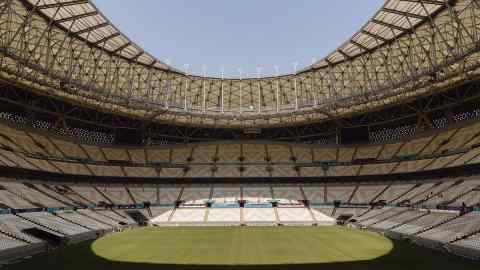 The job of the host country is to provide the bulk of the fans. Qatar not. My only glimpse of local football passion was a balmy evening on a marina promenade. A veiled mother from Qatar was leading three young boys, one in full Argentine outfit with football boots, another as Brazil’s Neymar and a toddler in plain clothes, watched over by an immigrant nanny. Other Qataris are probably already regretting hosting this thing. The locals, who after 12 years of preparation for their national coming-out party, put behind their side’s opening humiliation against Ecuador at half-time, are unlikely to return.

I live in a lower-middle-class South Asian neighborhood where a dosa meal costs about €2.50 and where all the soaps in the Loyal City supermarket promise “brightening.” I haven’t noticed Native Americans talking about soccer in restaurants or watching on screens, and you certainly don’t see them in stadiums. Every night after the last game, I travel back from the World Cup to a different country and grab a samosa before bed.

Everyone is chasing that rare beast: the truly dedicated fan

I enjoyed these tournaments. There are moments – like in 2010, when Siphiwe Tshabalala’s beautiful goal to open the World Cup in South Africa wrote his country’s history – when a player, a team or even a country reaches the pinnacle of its existence. I suspect Tshabalala will remember that shot on his deathbed. I love the Wales fans here singing for the world in Welsh. But my best memories from World Cups are visiting places I’ll never see again: On my one morning walk in the Amazon in 2014, a man washed himself in the mighty river while chickens stalked. In 2018 I wandered the battlefields of Stalingrad.

For the best World Cup experience, stay home. In 2018, I watched France’s thrilling victory over Argentina in a Moscow hotel bar. Back home in Paris, my children and their friends and their friends’ parents, with their faces painted in French tricolors, rolled in ecstasy on our carpet. It ended the night colored red, white and blue. That’s where the World Cup takes place: in living rooms and cafes around the world, among friends, preferably with beer.